What is the Brain’s Ambiguity Relief Process: with Arthur Carmazzi

In this Video of WHERE IS YOUR BRAIN, Arthur Carmazzi explains the brain’s Ambiguity Relief process and why it is important to your and your team’s success

Understanding this fundamental element of brain process psychology will support in building better teams, improving relationships, improve communication and affect your ability to influence others.

But there is a much bigger benefit to understanding Ambiguity Relief.

The mismatch of Ambiguity Relief processes is responsible wasted time, mistrust, low motivation and basically the downfall of relationships. By knowing a person’s “HOW”, we are able to manage our expectations and work together to set each other up for Success instead of Failure.

The Colored Brain Communication Inventory (CBCI), a psychometric test measures this by focusing on 2 areas:

More on the science behind these findings

The brain’s clarity seeking process for the purpose of improving communication and an understanding of how to maximize synergy and effectiveness in teams, team leadership, and organizations. This clarity achieving neuroactivity has been termed as the “Ambiguity Relief” process.

Ambiguity Relief has four quantifiable clarity seeking processes each with a predictable set of genes and neurotransmitters working on three different parts of the brain.

With observation of the genetic foundations of some brain disorders, it was discovered that there were parallels in the brain’s clarity processes. The hypothesis was that the Ambiguity Relief process was directly related to the sequence of taking action on ideas, communication, projects or even buying decisions and this was further tested. Beginning with the research from Herrmann Brain Dominance by Ned Herrmann, Human Dynamics work by Sandra Segal and David Horn, and Temperament and Character work by C. Cloninger it was found that each had different conclusions in Personality Profiling.

Further investigation revealed that while each had different reasoning and outcome, there was one factor that appeared to be consistent through their research, a process by which to achieve clarity. Once these elements were extracted, verified and tested across additional studies, there was overwhelming evidence that there were consistencies in how people got clarity when faced with solving problems, completing ideas, and understanding new information that did not change regardless of the environment or behavior. These classifications are have been Defined in the Colored Brain Model used in team leadership and enhancement.

Further to the identification of Ambiguity Relief processes, the investigation was broadened to the neuropathological elements responsible for these processes to find the specific neurotransmitters and combinations that are responsible for Ambiguity Relief. Various brain disorders were studied and identified as “Extremes” versions of these processes where specific neurotransmitters exceed the “normal” threshold in specific parts of the brain.

We're not around right now. But you can send us an email and we'll get back to you, asap. 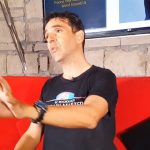 Where in our Brain Do We Interpret and Process Information and Get Clarity – with Arthur CarmazziCommunication, Human Resources, Management